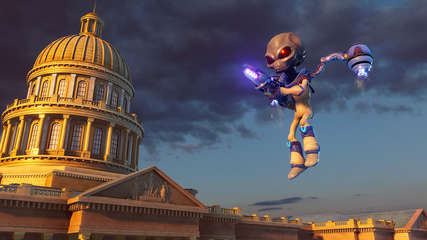 The cult-classic returns! Terrorize the people of 1950s Earth in the role of the evil alien Crypto-137. Harvest DNA and bring down the US government in the remake of the legendary alien invasion action adventure. Annihilate puny humans using an assortment of alien weaponry and psychic abilities. Reduce their cities to rubble with your flying Saucer! One giant step on mankind!


Based on Destroy_All_Humans-HOODLUM ISO release: hlm-destroy_all_humans.iso (16,149,520,384 bytes)
Alternative ALI213 crack is located in NoDVD folder, available after installation
Destroy All Humans! Skin Pack DLC is included and activated
100% Lossless & MD5 Perfect: all files are identical to originals after installation
NOTHING ripped, NOTHING re-encoded
Significantly smaller archive size (compressed from 15 to 10 GB)
Installation takes from 4 minutes on 16-threads CPU to 12 minutes on 4-threads CPU
After-install integrity check so you could make sure that everything installed properly
HDD space after installation: 16 GB
Language can be changed in game settings
Repack uses XTool library by Razor12911
At least 2 GB of free RAM (inc. virtual) required for installing this repack
Repack by FitGirl