ATTENTION! The minimum size of the repack is just 20.1 GB, read repack features for details. 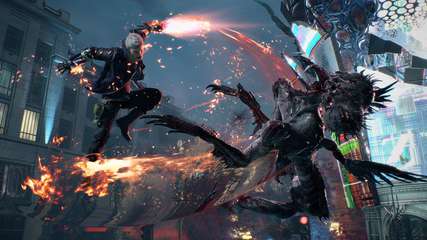 The Devil you know returns in this brand new entry in the over-the-top action series available on the PC. Prepare to get downright demonic with this signature blend of high-octane stylized action and otherworldly & original characters the series is known for. Director Hideaki Itsuno and the core team have returned to create the most insane, technically advanced and utterly unmissable action experience of this generation!

The threat of demonic power has returned to menace the world once again in Devil May Cry 5. The invasion begins when the seeds of a “demon tree” take root in Red Grave City. As this hellish incursion starts to take over the city, a young demon hunter Nero, arrives with his partner Nico in their “Devil May Cry” motorhome. Finding himself without the use of his right arm, Nero enlists Nico, a self-professed weapons artist, to design a variety of unique mechanical Devil Breaker arms to give him extra powers to take on evil demons such as the blood sucking flying Empusa and giant colossus enemy Goliath.


Based on Devil.May.Cry.5-CODEX ISO release: codex-devil.may.cry.5.iso (39,955,464,192 bytes)
Game version: v02062020/3853173; Missing DLC files added
Bloody Palace unlocking .EXE is included, thanks to Christsnatcher! Check the additional icon, created on your desktop. The mode will unlock after you start or complete the game prologue
30 DLCs are included and activated; Yoy may disable cheats DLCs by copying "steam_emu.ini" from "_No Cheats" to the game root
100% Lossless & MD5 Perfect: all files are identical to originals after installation (ONLY when installed with all voiceovers, history video and Live Action Cutscenes DLC)
NOTHING ripped, NOTHING re-encoded
Selective Download feature: you may skip downloading and installing of Japanese/English voiceovers, "History of DmC" in-game video and Live Action Cutscenes DLC, which is not recommended for activating during first playthrough
Significantly smaller archive size (compressed from 37.2 to 20.1~27.5 GB, depending on selected components)
Installation takes: ~15 minutes on 8-threads CPU; ~30 minutes on 4-threads CPU
After-install integrity check so you could make sure that everything installed properly (ONLY when installed with all voiceovers, history video and Live Action Cutscenes DLC)
HDD space after installation: up to 38 GB
Use "Language Selector.exe" in game root to change the game language; subtitles and VOs can be changed separately in game settings
Repack uses tools by Razor12911
At least 2 GB of free RAM (inc. virtual) required for installing this repack
Repack by FitGirl

You can skip downloading of voicover packs you don't need, "History of DmC" video and Live Action Cutscenes DLC. Here is the list of selective/optional files:

This repack is HEAVILY backwards compatible with my previous DmC5 repack. The only changed files are fg-04.bin and setup.exe, everything else can be rehashed.

building off the grid s08e08