ATTENTION! The minimum size of the repack is just 13.1 GB, read repack features for details. 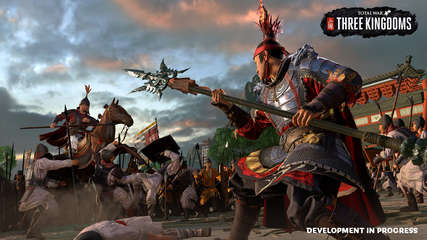 Welcome to a new era of legendary conquest.

This beautiful but fractured land calls out for a new emperor and a new way of life. Unite China under your rule, forge the next great dynasty, and build a legacy that will last through the ages.

Choose from a cast of 12 legendary Warlords and conquer the realm. Recruit heroic characters to aide your cause and dominate your enemies on military, technological, political, and economic fronts.

Will you build powerful friendships, form brotherly alliances, and earn the respect of your many foes? Or would you rather commit acts of treachery, inflict heart-wrenching betrayals, and become a master of grand political intrigue?

Your legend is yet to be written, but one thing is certain: glorious conquest awaits.


Based on Steam v1.5.3 Build 14293.1989218 multilanguage release: 56.1 GB
Total.War.THREE.KINGDOMS.A.World.Betrayed-EMPRESS crack only applied over, since original EMPRESS release is broken
7 DLCs are included and activated; game version is v1.5.3 Build 14293.1989218
100% Lossless & MD5 Perfect: all files are identical to originals after installation
NOTHING ripped, NOTHING re-encoded
Selective Download feature: you may skip downloading and installing of language files you don't need. Also you may exclude dowloading and installing of Chinese voiceovers, which can be combined with any other language (check game settings)
Significantly smaller archive size (compressed from 56.1 GB to 13.1~16.2 GB for any single language)
Installation takes 10-20 minutes (depending on your system)
After-install integrity check so you could make sure that everything installed properly
HDD space after installation: up to 36 GB (depending on language)
At least 2 GB of free RAM (inc. virtual) required for installing this repack
Repack by FitGirl

You can skip downloading of language files you don't need. Here is the list of such files:

va now that s what i call music 7