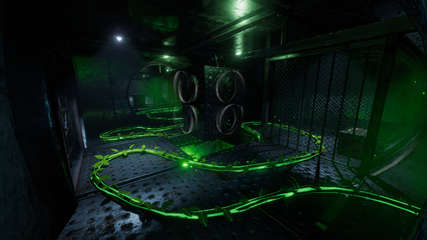 Vaporum: Lockdown is a prequel to the award-winning steampunk dungeon crawler Vaporum. It is a grid-based, single-player, single-character game, seen from a first-person perspective in an original steampunk setting, and inspired by old-school games like Dungeon Master I and II, the Eye of the Beholder series, and the more recent Legend of Grimrock I and II.

Vaporum: Lockdown follows the story of Ellie Teller, a scientist who is a part of a mysterious research project in the middle of an ocean. Following disastrous events, she struggles to survive and escape the tower of Arx Vaporum.


Based on Steam release Build 5547810 (Game version - Build #35): 4 GB, thanks to chronos!
Goldberg emu/crack applied over
100% Lossless & MD5 Perfect: all files are identical to originals after installation
NOTHING ripped, NOTHING re-encoded
Significantly smaller archive size (compressed from 4 to 2.1 GB)
Installation takes 2-3 minutes (depending on your system)
After-install integrity check so you could make sure that everything installed properly
HDD space after installation: 4 GB
Language can be changed in game settings
At least 2 GB of free RAM (inc. virtual) required for installing this repack
The game currently doesn't work properly on Windows 7 systems
Repack by FitGirl